Picture: K.Yuon, "The New Planet" (1921)
To the centennial of the Russian Revolution
This novel is about how subtle and dependent on human decency and goodwill is our world, including that world in which souls come at the end of their earthly path. Among many collisions - the story of the Russian who prevented a nuclear strike against America, and about the American who saved mankind from the artificial apocalypse conceived by global sect of misanthropes...


The action takes place in Moscow, Russian Federation, in present times.
A fifty-year-old “egghead” and flopper, talented mathematician Shakhmatov falls into a mess and has to flee from policemen and bailiffs along the narrow streets of one of the mystical areas of the Moscow center. Accidentally he falls into the "wormhole" and finds himself in a "thin" parallel world. As it soon becomes clear, in this strange world, located somewhere between Hell and Paradise, there live the ascetics of the Soviet era, whose life ended between 1919 and 1962. For each of them exists some sin - although in the modern society many of such are not recognized as sins at all.
In search of ways to return to his former life, Shakhmatov gets acquainted with the inhabitants of the parallel world, arriving to his capital - Moscow The Newest. It is fantastic city filled with flowering spring gardens and fascinating buildings propping up the sky, embodiment of the brightest and daring ideas of the Soviet era about  beautiful and harmonious world. But a gigantic bright city, designed for hundreds of millions, stands half empty - for some reason these millions people, having finished their earthly way, did not arrive to live here. Moreover - the "parallel state" is threatened by a terrible danger: due to incomprehensible processes, one by one, along with inhabitants, its peripheral regions fall into the abyss. 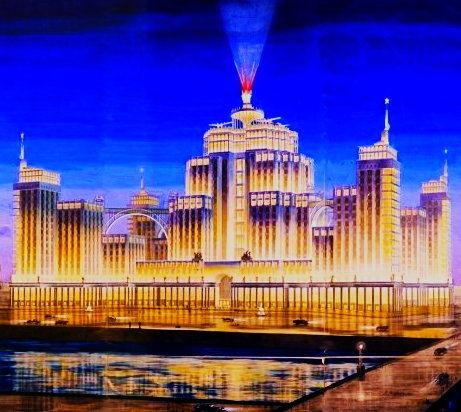 The leader of Moscow The Newest, who maintains a secret channel of moving between two worlds, agrees to help Shakhmatov, but instead asks to help in searching his wife, who disappeared during one of the recent visits to real Moscow. Shakhmatov agrees - and on his return to real Moscow he finds himself in special psychiatric jail-like clinic, to where on terms of secret international program people are brought for whom there is a suspicion that they have turned from a "delicate" world.
With the help of a young American doctor working in this clinic, Shakhmatov manages to escape and teleports again to Moscow The Newest. By chance, the head physician, who manages this project from the Russian side, teleports together. From revelations of the chief physician it becomes clear that US scientists with substantial Russian help are working hard to create a similar "thin space," and the aliens captured from Moscow are transferred to America as test material. The goal of project is to establish stable area in infernal zone in which the global elite can survive the planetary cataclysm and later, applying quantum teleportation, return back to the Earth purified from "unnecessary burden of mankind" for infinitely comfortable and almost eternal life on the basis of latest technologies... It also turns out that it is the American experiments that lead to collapse in the outskirts of Moscow The Newest.
Top leadership of Moscow The Newest after hot discussion decides to destroy the Research center in America located in the patrimony of Mormons - among the deserts of Utah. The task is assigned to the crew of the Soviet M-3 strategic bomber, which crashed in 1962 (Caribbean crisis) and which was carried along with its thermonuclear weapon on board into the "shadow state". Through one of the "wormholes" in the celestial sphere old-fashioned jet bomber suddenly escapes into the real world and makes an exciting flight across the Atlantic and Canada, while modern air defense systems are unable to destroy it. 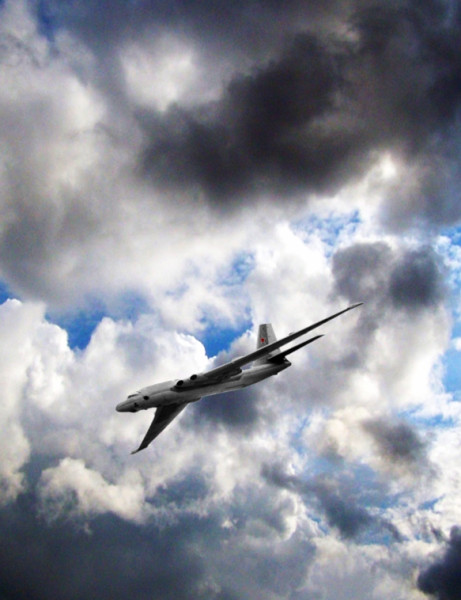 For the first time in its history, America is experiencing a moment of truth and fear, ready to agree to any conditions. But since the crew does not go to deals, in order to avoid a thermonuclear strike the US Air Force is ordered to bomb and burn the Research center in Utah with its own hands. The commander of the M-3 reaches the ruins only, he is furious and wants to punish America at least of his personal account - but his co-pilot does not allow a nuclear attack on Washington D.C. by remembering phrase by the Lord almost forgotten in the godless world: "Vengeance belongeth unto me; I will recompense..." As a result, the thermonuclear monster already switched into combat mode follows towards the Atlantic bottom and the M-3 returns to its own.
However, due to the destruction of the American "thin area" after US Air Force attack, which, as it turned out, has been "illegally added" to Moscow The Newest, irreversible processes of destruction immediately start there leading to the collapse of the infernal city and nearly most of its inhabitants. Miraculously survived Shakhmatov meets on the ashes his familiar Anastasia, who keeps terrible sin in her soul - rejection of the child. In spring of 1941 Anastasia agreed for abortion to go for service in Red Army hospital near the western border, where she was killed on the very first day of Nazis invasion... It was Anastasia who earlier told Shakhmatov about vacant blocks of millions of houses that no one lives in, and she considered her duty every night to come to the cherished place where the night snowfall was personified by the anguished souls and where she tirelessly was asking for salvation each of them...
Suddenly, the darkness over the smoking ruins is being cut with bright ray from the rising star, which turns out to become a new sun! In some distance, where the abyss earlier began, a gigantic bridge suddenly appears designed by engineer from Moscow The Newest who did not have chance and time to realize his great idea on the former land… In the middle of the snow-covered field appears endless network of rails with uncountable trains on it, to which millions of resurrected compatriots start boarding. Among them Shakhmatov sees missing inhabitants of Moscow The Newest including those who did not settle into handsome apartments...  he sees among the endless crowd war combatants, workers, engineers, prisoners of labor camps, collective farmers, pilots, sailors, scientists, designers, poets, romantic internationalists, who, in due course, at 1920-30th did not afraid to immigrate to USSR from Italy or United States, - "... the whole of Red Russia entirely, immense and inexplicable…" Resurrected people with inexpressible delight find their loved ones, and Anastasia finally meets her unborn child – suchwise her terrible sin is forgiven! Trains one after another are carried away to the sparkling infinity over the bridge created with the human genius atop the hellish abyss, and no one has doubt that onwards this bridge there will be real, bright and eternal Paradise!
Shakhmatov looses his chance to jump into the last carriage because...  he wakes up. As it turned out, everything he saw before was a coma dream, caused by falling under a truck and subsequent long treatment. However his bosses visit him in hospital with the “encouraging news” that he, despite the injury, was appointed the head of research section in top-secret international project. Shakhmatov’s task will be re-recording human consciousness on a physical medium (“brain contents to flash card”). Anon it appears that the purpose of secret project is designing the "artificial soul of mankind" on the eve of …soon complete self-destruction of the global population. Meanwhile the world elite, including group of scientists with secure ticket for Shakhmatov, will survive man-made apocalypse in the colony on Mars!
Shakhmatov immediately understands the meaning of his dream and refuses the accept this offer. He again falls into oblivion and sees himself as one of the millions of unsuccessful snowflakes-souls. A snowy whirlwind takes him to a familiar cliff, where in the darkness the grandiose bridge is still seen, along which the trains were recently departured to Paradise. But now the rails are empty and even turned into rusty cobwebs, furthermore the way to bridge is forbidden by red semaphore. Shakhmatov’s snowflake slowly descends to the cold rail and after being burned with the last hope - rapidly melts, turning into a lone drop of tears ...
True, at the last moment the semaphore flares with green light - but who will pass through the abandoned rut?